Six members of The Elders, led by the organisation’s Chair, Kofi Annan, concluded a successful three day visit to Moscow with a meeting with President Vladimir Putin at his residence on April 29. In addition to President Putin, the Elders held in-depth discussions with Foreign Minister Sergey Lavrov, former Soviet President Mikhail Gorbachev and former Prime Minister Yevgeny Primakov, as well as the heads of leading Moscow-based think tanks. 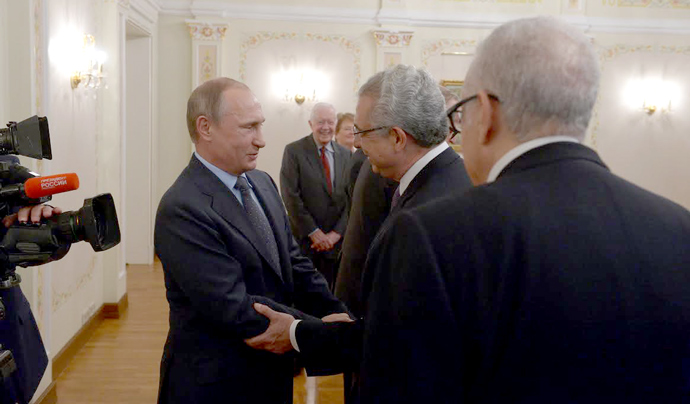 A recurrent topic of discussion was the complex and dangerous situation in the Middle East today. The Elders agreed with their Russian hosts on the dangers posed by the rise of terrorism and extremism in Syria and Iraq, and the worrying spread of its influence to other regions.

They also spoke with their interlocutors in Moscow about the need to bring the Iranian nuclear discussions with the “P5+1” group of major states, including Russia, to a successful conclusion by the end of June, and then to make sure the agreement is fully implemented.

As an independent organisation dedicated to the pursuit of peace worldwide, The Elders are keen to encourage steps by all concerned that can help de-escalate global tensions and the risk of further conflict.

Jimmy Carter was elected President of the United States in 1976, and he served from 1977 to 1981. During his time in office, President Carter became known as a champion of human rights and a peacemaker in international affairs. He negotiated the 1978 Camp David Accords and peace treaty between Egypt and Israel.

He also established US diplomatic relations with the People’s Republic of China, and negotiated the SALT II treaty with the Soviet Union — a long-term comprehensive agreement limiting the development of nuclear weapons. President Carter received the Nobel Peace Prize in December 2002 for “his decades of untiring effort to find peaceful solutions to international conflicts, to advance democracy and human rights, and to promote economic and social development.” He is the only U.S. President to be awarded the prize after leaving office. On his visit to Yale, President Carter spoke about the issues addressed in his most recent book, “A Call to Action: Women, Religion, Violence and Power.” He charged that discrimination and violence against women and girls the world over is the most serious, pervasive, and ignored violation of basic human rights today.

The Elders, independent global leaders, brought together by Nelson Mandela, who offer their collective influence and experience to support peace building, help address major causes of human suffering and promote the shared interests of humanity and of which Ernesto Zedillo is a member, met with some of Iran’s leadership in a visit to that country on January 30, 2014.

The meetings included President Hassan Rouhani, former President Akbar Hashemi Rafsanjani, Speaker of the Majlis, Ali Larijani and Foreign Minister Javad Zarif, among others, The Elders delegation, led by Chair Kofi Annan, were encouraged by Iran’s spirit of openness and dialogue with the outside world and expressed their desire for further engagement in the region.

Salman Rushdie on Freedom of Speech and the Power of Hatred

Interview at Yale Sponsored by the YCSG and the student group, The Politic

Author Salman Rushdie described for a Yale audience his experiences during years of hiding after Ayatollah Ruhollah Khomeini of Iran deemed his novel “The Satanic Verses” was offensive to Islam and announced that he should be sentenced to death.

In an interview at Yale sponsored by the YCSG and the student group, The Politic, Salman Rushdie noted that freedom of speech “is the liberty on which all other liberties depend” and pointed out that when expression is banned, it takes on more power. He pointed out that “there is no right not to be offended.”

After the Fall: The Future of Global Cooperation

Many of the world’s most serious problems require concerted international efforts to address them. Calls for better ‘global governance’ reflect the accurate perception that global markets seem to have exceeded the ability of national governments, or ad hoc international cooperation, to address the problems to which they may give rise.

Four interrelated factors make international economic cooperation difficult. First, normative theory is only favourable to global governance in a qualified way, depending upon whether or not international collective action is truly essential to provide the desired public good. Second, even where the case for collective action is strong, governments face substantial domestic political obstacles to participation in global cooperative enterprises. Third, there are substantial divergences among the goals and attitudes of the major international economic players. And, finally, the recent history of cooperative efforts is not particularly encouraging.

International Cooperation in the National Interest

Reforming the UN for Peace and Security

A small mission of six Elders, including Kofi Annan and Ernesto Zedillo, visited Moscow in April and met with President Vladimir Putin.

The 39th President of the United States visited the University on December 2, 2014 to talk about his call to action on discrimination and violence against women.

Salman Rushdie on Freedom of Speech and the Power of Hatred

An interview at Yale sponsored by the YCSG and the student group, The Politic.

After the Fall: The Future of Global Cooperation

Zedillo and co-authors urge political leaders to prepare their societies for the governance required to tackle global crises.

Rethinking the War on Drugs

Reforming the UN for Peace and Security