THANK YOU FOR BEING LATE: An Optimist’s Guide to Thriving in the Age of Accelerations

What was achieved with the Paris Agreement and what will need to be done moving forward?

Reaching an agreement on the successor to the Kyoto Protocol was the motive for the 21st Conference of the Parties (COP21) of the United Nations Framework Convention on Climate Change that took place in Paris in December.

The Agreement achieved at the COP21 has been hailed as a significant success for the multilateral system. It is argued that it is the first-ever universal, legally binding, climate deal among 195 countries; that its goals to limit the increase in global average temperature and the submission by countries of their national climate action plans along with other provisions in the Paris Agreement, will put the world on track to avoid dangerous climate change.

However, has the December agreement overcome the problems that made the Kyoto Protocol so ineffective? Roundtable participants each will present an assessment of the Paris Agreement from the perspective of their own work, experience and expectations previous to COP21 as well as their thinking on what other steps, internationally agreed, could be taken to achieve a more effective regime.

The Mounting Challenge of Global Governance

There are more reasons today than there were just a few years ago to regret the patent inaction, or even obstruction, to reform some critical aspects of the international system. This is worrisome because the opportunity cost of such inaction, human and economic, is mounting.

Conflicts taking hundreds of thousands of human lives and resulting in millions of refugees; quasi-stagnant developed and emerging economies regressing to the mean in their growth trajectory; globalization contained or retreating because its downsides are not addressed and its upsides are not tapped more decisively; the global community’s failure to adequately provide significant global public goods like climate change mitigation; and stubborn attachment to expensive approaches to deal with some problems despite overwhelming evidence against their efficacy; are all challenges being hugely enlarged, although of course not solely caused, by lack of serious commitment to enlightened international collective action.

International Conference, May 27 and 28, Greenberg Conference Center. Free and open to the public

An international agreement to limit carbon (and other greenhouse gases) emissions to mitigate climate change effectively has been elusive. If the experience with the Kyoto Protocol as well as the recent (2-25-15) Negotiating Text released by the Ad Hoc Working Group on the Durban Platform for Enhanced Action of the UN Framework Convention on Climate Change (UNFCCC) are any guide, it is safe to predict that even if the December 2015 meeting of the UNFCCC is successful in the sense of yielding a new protocol by all the parties, the emission reduction commitments embodied in such a protocol, even if honored in practice, would not be sufficient to render the optimal mitigation strategy.

There is also the possibility, hopefully negligible, that the Paris meeting may fail altogether to produce a new international agreement. In both cases — partial or total failure — it seems prudent and timely to start envisioning next steps with a view to achieving an international agreement leading to the desired objective of mitigation.

Although many experts believe that international harmonized carbon pricing would provide the most effective system, this has not really been given a true chance to be intellectually depicted in the necessary detail to be considered properly by policymakers. Admittedly there have been serious efforts to outline how to go about designing national emissions controls based on carbon pricing, but the details that one can find in those works do not automatically or necessarily apply to an international regime.

Now is the time to think seriously about the elements necessary to build an international agreement for climate change mitigation based on harmonized carbon pricing. Our aim is not only to update the rationale of global carbon pricing versus global cap and trade, but also to explore in greater detail the issues of negotiating that alternative and the details of the key aspects for its implementation. With these ideas in mind, the Yale Center for the Study of Globalization organized a conference on May 27 and 28, 2015 to address these topics. The full proceedings, including presentations and discussions, are available at the link below.

The Case (or not) for the Trans-Pacific Partnership (TPP)

The Trans-Pacific Partnership (TPP) was agreed in Atlanta on October 5 when Australia, Brunei, Canada, Chile, Japan, Malaysia, Mexico, New Zealand, Peru, Singapore, the United States and Vietnam concluded their negotiations. Called a free trade agreement, it is not mainly about trade and the full text was not released until November 5. Now that the details are known, the Yale Center for the Study of Globalization and the Jackson Institute for Global Affairs have organized a panel to discuss the deal and its implications. Free and open to the public.

Africa at a Fork in the Road: Taking Off or Disappointment Once Again

A Yale Center for the Study of Globalization Ebook. 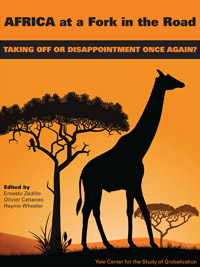 In April of 2014 the Yale Center for the Study of Globalization brought together a select group of academics, practitioners, and policymakers to examine in detail Africa’s development. The conference participants who convened at Yale University explored the sustainability of Africa’s current trajectory, analyzed which policies and practices have proven most effective throughout the region, and inquired what needs to be done to keep Africa growing and address more effectively the acute poverty and human development problems that persist in some countries. In the volume that emerged from the conference proceedings, members of the international scholarly community as well as specialists from multilateral institutions from Africa, the US, and Europe together look in-depth at Africa’s struggles and its accomplishments. The papers in this volume contain research and analysis on a range of issues that pertain to the political, economic, and social aspects of Africa’s past growth and what forces are shaping its path into the future